The source-filter model of voice production describes the voice as consisting of a power source (the lungs), a sound source (vibrating vocal folds) and sound modifiers (the vocal tract). Using various methods to isolate and analyse these aspects of production, at York Centre for Singing Science researchers are beginning to understand the methods employed by singers to create different sounds.

Researchers at York are investigating the perception of sound in the context of solo singing, both in terms of the audience and the performer. Whilst perception varies between individuals certain parameters associated with specific sounds can be identified, especially in terms of preference and categorisation. 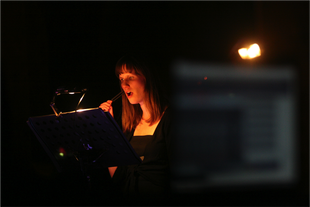 Very small changes during any part of the vocal process can have a major impact on the sound produced by a singer. These can include:

A feature of solo singing that is often stereotyped within certain genres of performance (particularly opera), vibrato is apparent in sung tones in most singing styles, including jazz, musical theatre and pop. Through acoustic analysis as well as analysis of electrolaryngograph data, researchers at York have found distinct patterns of vibrato behaviour within tones that distinguish classical singers who specialise in early music (composed pre-1800) from those performing grand opera.